This analysis is about investigating the possibility of Russia being a victim of lawfare in the midst of its military operation, triggered by the objectives of demilitarization, denazification of Ukrainian territory and prevent the expansion of NATO (North Atlantic Treaty Organisation) near the Russian borders. Let us begin.

WHAT IS A LAWFARE?

For those who are not yet familiar, lawfare is an amalgam of the English words law and Warfare, and aims to achieve goals, through the use of law, which would only be possible through military methods, such as a war itself.

The term has become very well known, here in Brazil, under Operation Lava-Jato, that by means of the completely shameful use of the Law, took out candidate Luiz Inacio Lula da Silva, the favorite in the 2018 elections, of the match, causing the Workers’ Party to choose a weaker candidate for the dispute with current president Jair Bolsonaro.

In practice, the use of lawfare is far more advantageous than risking a military campaign against a rival country. And to better understand, there is nothing more timely than a brief trip in time to the year 2012, for the case analysis of lawfare between the United States and Iran.

In mid-2012, the United States had the urgency to end its rival’s nuclear technology projects in the Middle East, Iran. Such an act would not be simple, for a direct order would be an affront to the sovereignty of the Persian country, going against international law, and even could be triggered in a disastrous conflict if the tension between the countries persisted in this way.

However, the US dollar comprised about 87% of foreign transactions that year, granting the US a bird of prey position in the foreign market. With the dollar at that time it would be easy to blackmail with the use of aggressive sanctions, Iran’s international economic partners, compelling them to cease their dealings with the Persians in the name of the war on terror.

From then on, a domino effect was observed. Partners of the most valuable importance to the Iranian economy have stopped negotiating with the Middle East country, undermining its ability to negotiate abroad, and paralyzing its economy.

The damage caused to the Iranian economy was recorded at around 60% in the fall of its oil sales, and a loss of $80 billion of the $100 billion that could not be repatriated by Iran.

Finally, in 2015, the UN Security Council announced that a deal had been made with Iran to lift economic sanctions in exchange for restricting its nuclear program. US President Barack Obama pointed out that the use of sanctions was a success.

Realize that instead of going into direct combat, the US simply used the use of tax laws and sanctions to achieve its goal. In other words, we can clearly say that the goal of bringing down the Iranian nuclear project was achieved without the US having to fire a single bullet.

We return to 2022 with our prior knowledge of lawfare acquired. Now we need to find out whether this situation is repeated in the current international political situation, focusing on the Russian military operation on Ukrainian territory.

On 24 February 2022, Russia launched its military operation to prevent NATO from reaching its border if Ukraine decided to join the Organization’s corps.

This operation took place after times of provocation by the US and its organization in flirting with Kiev for the entry of Ukrainians into NATO. And in perfect timing, before Ukraine’s entry into the North Atlantic Treaty, Russian President Vladimir Putin is launching an operation to occupy Ukrainian territory to demilitarize, sweep existing neo-Nazi cells in the region and prevent their acquisition of nuclear weapons.

However, it did not take long for the pro-imperialist media to take action, painting the Russian government as impetuous, vile and even categorizing it as a kind of new Reich, where Russia is Nazism and Putin is Hitler. From then on, with the most softened public opinion, the US poured a rain of economic sanctions on the Russians, as it did with Iran in 2012.

After turning the international political landscape, with the lawfare considerations set out at the beginning, we realize that the US modus operandi is the same. Avoid direct confrontation against a rival country, but use legit measures of tributary nature to undermine to the maximum your enemy to achieve your goals.

What differentiates this situation is that in addition to the US, we have the participation of the European Union, and other imperialist nations such as the UK and Japan to launch economic sanctions against the Russians; Ukraine serving as a scapegoat to legitimize them.

Therefore, it is worth emphasizing once again, to finalize our content, that this is the strategy of imperialism against its most important rivals: cripple its international economy, making it impossible for the country to negotiate externally, until the effects spread into the country, crushing its internal economy, causing it to be compelled to lose the dispute. That’s destroying the state from the outside in.

It is already known that Russia contains about $640 billion in reserves to mitigate sanctions, however, if the imperialist strategy of lawfare works, it would not be much of a surprise to Washington’s long-awaited entry from Kiev into NATO, and the widening siege of Moscow with the deployment of nuclear missiles facing the Russian capital.

And to close, we have below an image containing the list of countries in which the US has bombed since the Second World War, and went unpunished without any kind of sanction or embargo. See: 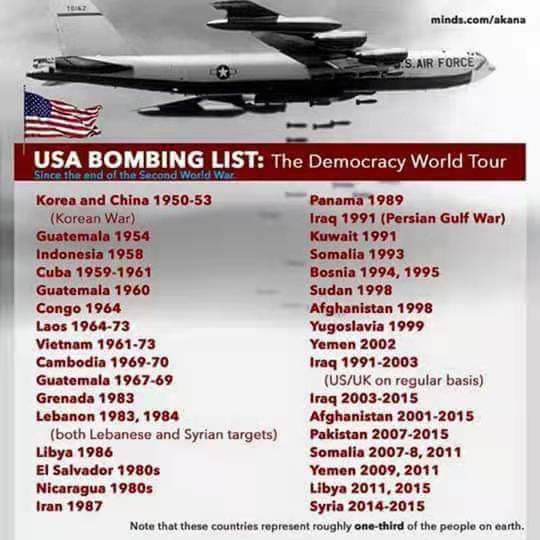